Cyber security threat to persist in 2018

Cybersecurity will continue to be a ’hot topic’ this year, demanding the attention of technology experts.

According to statistics of the Information Security Department under the Ministry of Information and Communications, 95 percent of issues related to information security are caused by human negligence.

Recently, passwords of more than 1.4 billion e-mail accounts in the world have been disclosed. The Viet Nam Computer Emergency Response Team (VNCERT) analyzed and found some 438,000 accounts in Viet Nam, of which some 930 had the government domain name, “gov.vn”. 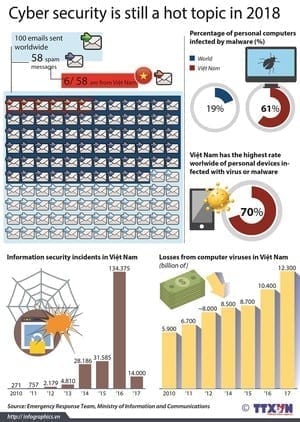 Notably, hackers would use smarter technologies, including artificial intelligence. In addition to this, cyber attacks would become increasingly dangerous and more difficult to detect as hackers were likely to use advanced threats to paralyze national infrastructure, Hung said.

He also pointed out one of the main reasons for information insecurity was low levels of awareness.

The complexity of information technology depends on the variety of devices being used, with many users in organizations and businesses using personal devices, according to Hung.

If they do not have security solutions, the risk to their information will be implicit right in the mobile device itself.

Currently, with the development of technology and high speed of transmission lines, the number of internet users in the country has increased rapidly.

But users’ perception of information security is low. A majority of Vietnamese people do not have the habit of using software copyrights.

He emphasized on raising awareness of users to detect infected devices while equipping them with cyber-security knowledge, information technology skills and routines of scanning and upgrading software.

Last year, damages caused by computer viruses in Viet Nam were worth VND12.3 trillion (US$547 million), increasing from VND10.4 trillion in 2016.

Ngo Tuan Anh, vice president of BKAV technology group, said attacks on the Internet of Things equipment or malicious codes of blackmailing or digging out virtual money were increasing both in number and sophistication.

Statistics also show that 55 percent of users use the same passwords for many accounts, which risk password exposure.

Technology experts predict that all security network threats this year will stem from attacks on Internet-connected devices.

Thus, besides raising awareness of users, enterprises and organizations need to apply security policies and technology.

Organisations and enterprises, as well as individual computer users using the internet, should restrict the disclosure of personal information via mobile phones, emails and internet services.

cybersecurity cybersecurity threats in 2018
Cyber security threat to persist in 20182018-02-042018-02-04https://www.wpsortit.com/wp-content/uploads/wpsortitlogoicon.fw_.pngWP Sort IThttps://www.wpsortit.com/wp-content/uploads/scope-of-cybersecurity-threats-in-2018.jpg200px200px
About
Editorial Team
We scour the web to find useful information, tricks and tips so that you don’t have to. Repost here is not always an endorsement.
Copyright ©2022 WP SORT IT. All rights reserved. PART OF RPG - MOJO MEDIA GROUP 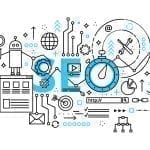 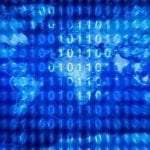 Cybersecurity Threats in the Age of IoTLONDON SEO AGENCY
FREE For 2 Weeks. Then, Under $2 per day . Cancel Any Time!
LETs GO
This is default text for notification bar
Learn more